State Farm Stadium to host two Quarterfinal matches in the Knockout Stage of the Concacaf Gold Cup. For the first time in history, this year’s edition of Gold Cup will feature each group’s final group stage matches played simultaneously to ensure an even more compelling spectacle as the teams compete to reach the Knockout Stage.

Enhancements to the 2021 Concacaf Gold Cup
For the 2021 Gold Cup, Concacaf introduced a series of football first enhancements to add more anticipation for fans and increase competition between the teams. This included a first-ever Gold Cup draw, which took place in September 2020, the introduction of a Prelims to qualify the final three teams into the group stage and a new format in the knockout stage which means teams on opposite sides of the bracket will meet from the quarterfinals onwards. The 2021 Gold Cup will also include the AFC Champion, Qatar, as a guest participant and it will be the first Gold Cup to use Video Assistant Referees (VAR).

Each Premium Space is designed to provide the highest level of quality through easy access to comfortable appointments and contemporary furniture inside the private space – the best way to watch any event! Every Premium Seat ticket offers access to multiple upgraded experiences including:

For more information or to purchase Premium Seating email [email protected] or call 623-433-7157.

First, and most importantly, the health and safety of all guests in State Farm Stadium is paramount.

All guests must agree that neither they will attend the Gold Cup if any one or more of the following is true on the day of:

Please note: According to the CDC, older adults and people of any age with serious underlying medical conditions may be at higher risk of death or severe illness from COVID-19. All guests should evaluate their risk in determining whether to attend.

Yes. Face coverings are required for all in attendance with the exception of children under the age of 2 years.

Will face coverings be provided?

State Farm Stadium strongly encourages all attendees to bring their own face covering however disposable masks will be available for those who do not have appropriate face coverings.

What preventative steps is the stadium taking against COVID-19?

At State Farm Stadium, the health and safety of our guests and staff is our top priority.

What additional precautions should guests take?

You must follow all stadium policies, including health and safety policies, and posted instructions while in the stadium and on stadium grounds. An inherent risk of exposure to COVID-19 exists in any public place where people are present. COVID-19 is an extremely contagious disease that can lead to severe illness and death. According to the Centers For Disease Control and Prevention, senior citizens and those with underlying medical conditions are especially vulnerable. By entering the stadium and stadium grounds, you voluntarily assume all risks related to exposure to COVID-19. 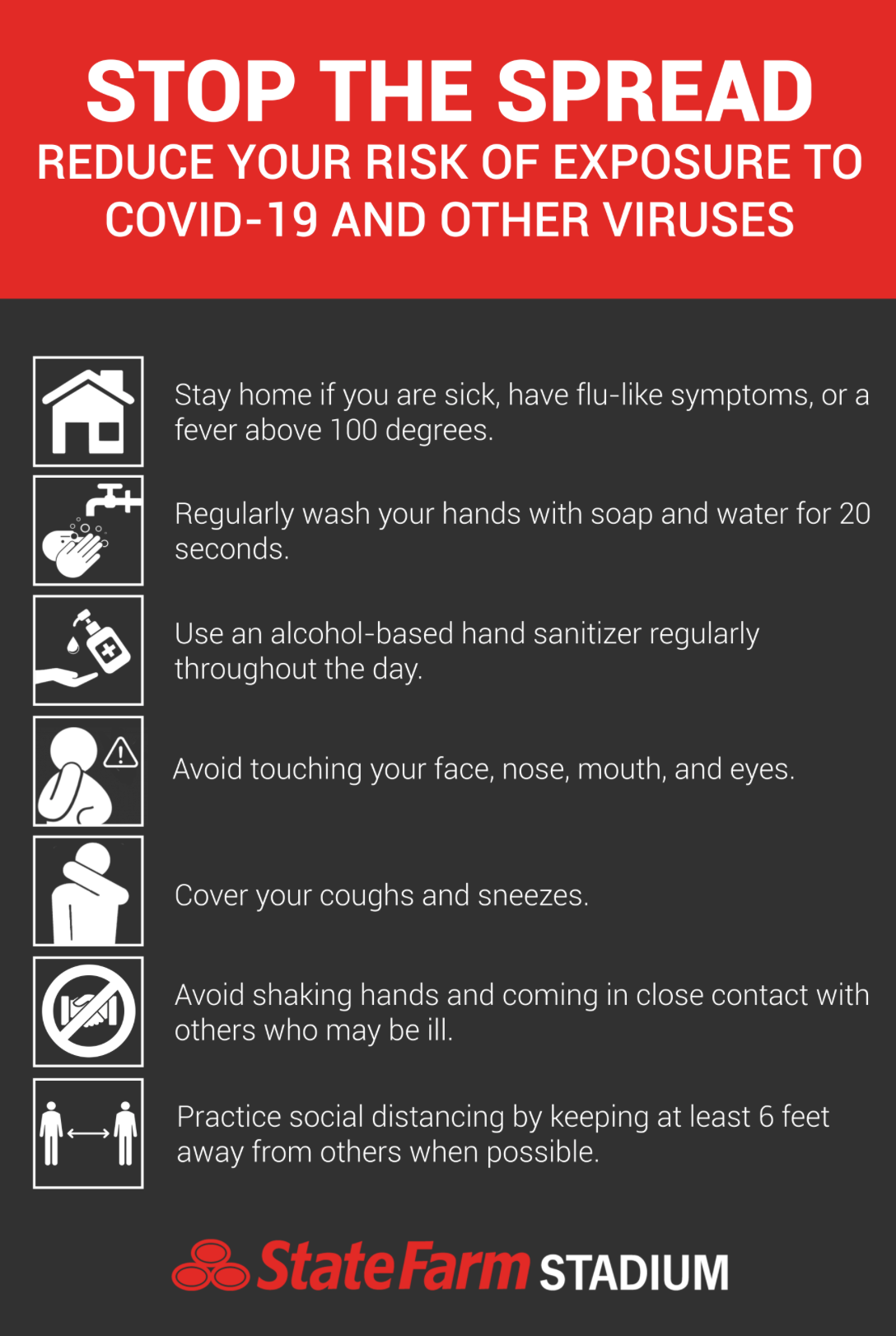 Fully vaccinated ticketholders & event attendees will not be required to wear masks or facial coverings while attending events at State Farm Stadium. Non-vaccinated individuals are strongly encouraged to continue to adhere to the face covering recommendations of the CDC and local health authorities. During events, all working personnel will continue to wear face coverings until further notice.