Feld Entertainment announced that State Farm Stadium in Glendale, Arizona will be a tour stop in the upcoming 2021 Monster Energy AMA Supercross, an FIM World Championship, season. Supercross fans will be welcomed back into stadiums at reduced capacities.

Supercross was the first sport to complete its season and championship in a bubble environment in 2020 due to the pandemic. Bubbles are now widely popular and being used by the NBA, NHL, WNBA, and MLB to great success. The NFL was one of the first sports to welcome fans back to stadiums and Supercross is excited to follow their lead while also using some of their own bubble-environment tactics in the 2021 season by hosting multiple races in a single location.

One of the unexpected surprises of racing in the bubble in Salt Lake City was the creation of mid-week races due to the condensed nature of the schedule. Racing every Wednesday during the three-week stretch became a fan-favorite while also boosting television ratings in an otherwise non-traditional broadcast window for Supercross.

For additional information or to be added to the Premium Seating waiting list email [email protected].

First, and most importantly, the health and safety of all guests in State Farm Stadium is paramount.

Supercross has implemented enhanced health measures to help ensure the highest standards of wellness when it comes to today's live experience. Seating capacity will be reduced at each stadium with a Pod Seating structure, which will allow family and friends to safely enjoy all the action while social distancing from other groups in attendance.

Face covering must be worn at all times in Sportsmans Park and inside State Farm Stadium unless you are actively eating or drinking while in your seat.

The NFL Clear Bag Policy will be enforced for all events at State Farm Stadium. State Farm Stadium strongly recommend fans to not bring any bags, however the following will be permitted:  One clear bag no larger than 12” x 6” x 12” or a standard one (1) gallon freezer bag. Please review the complete bag policy by clicking here. 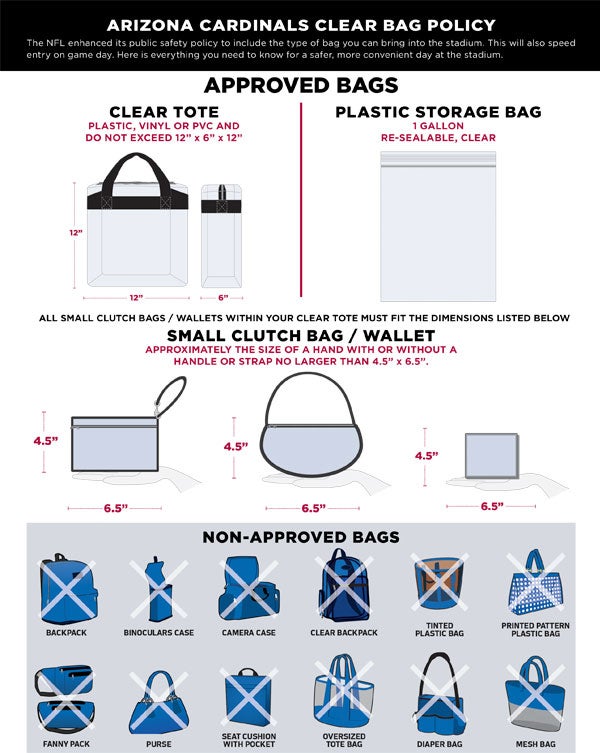 Metal detector screening and a search of all bags and other items being carried in will take place at stadium gates. There are no provisions available at the stadium to store or safeguard any prohibited bags. Guests will be asked to return prohibited items to their cars.

You must follow all stadium policies, including health and safety policies, and posted instructions while in the stadium and on stadium grounds. An inherent risk of exposure to COVID-19 exists in any public place where people are present. COVID-19 is an extremely contagious disease that can lead to severe illness and death. According to the Centers For Disease Control and Prevention, senior citizens and those with underlying medical conditions are especially vulnerable. By entering the stadium and stadium grounds, you voluntarily assume all risks related to exposure to COVID-19.